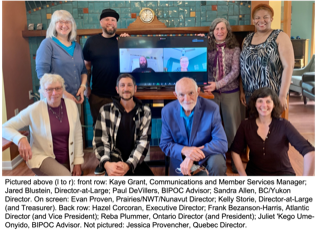 Based primarily in Calgary, Hazel Corcoran has served as CWCF’s Executive Director since 1995. She first became interested in the idea of employee ownership while completing a Master’s in Linguistics at Berkeley. She later went on to study law, and discovered the worker co-op model while completing a research paper on various models of workplace democracy. Coincidentally, CWCF was in the process of forming nearby, and Hazel attended the founding AGM and ultimately helped the Federation draft its bylaws.

Worker co-ops appeal to Hazel as a way to empower workers and help them flourish in the workplace and learn new skills.  She believes it’s the most humane way to organize the economy. She would like to see Canada’s worker co-op sector grow significantly, and hopes it can partner with government and the solidarity economy to achieve this.

In addition to her work with CWCF, Hazel has also served as a director of a variety of co-operatives, in the past including Calgary Co-op, First Calgary Credit Union, le Conseil canadien de la coopération et de la mutualité, Co-operatives and Mutuals Canada.  She is currently a director of The Co-operators where she chairs the Member and Co-operative Relations Committee.

In her spare time, Hazel enjoys spending time with her family, walking in nature, and cooking Cajun food, a legacy of her origins in New Orleans. She’s also an active member of Prairie Sky Cohousing in Calgary. Based in Winnipeg, Kaye Grant has served as CWCF’s Communications and Member Services Manager since 2013. She is also the key Consultant with Reconnaissance Management Consulting Group Inc. Kaye has worked for over 25 years within the non-profit/social enterprise sector in a number of roles.  Kaye’s experience in working with the non-profit sector and local community groups enables her to maintain working relationships within the community. She has experience in training and facilitating workshops and courses in business related subjects.  Kaye is on the CCEDNet board and also on the Manitoba Co-op Association Board as the CWCF representative, as well as the Peg City Car Co-op Board in Winnipeg.

Kaye has long had a passion towards poverty alleviation and equality and has focused her work with organizations that contribute to this mandate. She was introduced to the worker co-op model by her then-teenage son, and found the variety of tasks he was performing as a member of one intriguing. She ultimately found a way to pursue this interest at CWCF, where she appreciates the opportunity to work with its members.

Kaye’s two young adult children have shaped her work with their values of equity and collaboration, and she wants to help build up the worker co-op model so it offers more opportunities for young people to find fulfilling work. Increasing awareness of worker co-ops is one of her main goals.

Kaye is an avid cyclist, biking wherever and whenever she can, and is also committed to making cycling possible for everyone. Based in Kentville, Nova Scotia, Kristin Van Hattem has served as CWCF’s RRSP Program Manager and Bookkeeper since November of 2016. She has learned a great deal about worker co-ops during her time with the federation, and likes how they emphasize work-life balance and give employees a say in their working conditions. Kristin also appreciates that CWCF supports a national network of worker co-ops and how these organizations are concerned with wanting to make the world a better place. She is especially excited by the work being done by so many innovative co-ops and CEDIFs throughout Nova Scotia.

In her spare time, Kristin enjoys discovering new trails, parks and beaches with her family. She relaxes by reading, crafting and doing crossword puzzles. Based in Calgary, Kenzie Love has served as CWCF’s Communications and Executive Assistant since 2017. A former journalist, he holds an MA in Journalism from Western University, and is pleased to have the chance to employ his research and writing skills with organizations including CWCF, the Canadian Unitarian Council, and Autism Calgary.

Kenzie has appreciated the chance to learn about worker co-ops in his role with the federation, and has particularly enjoyed the opportunity to connect with worker co-op members across Canada through the member profile series he writes for the newsletter.  He hopes that he can make the worker co-op model better known and understood through his work.

In his spare time, Kenzie enjoys reading, pub trivia, choral music, and going for walks with his dog, Louis. Based in Kentville, Nova Scotia, Josh Dyke has served as CWCF’s RRSP Program Administrator since 2016, a position that has grown since he began the job to include more hours and interaction with investors. Josh had little knowledge of worker co-operatives before starting with CWCF, but has come to learn more about them through his work with the federation, including a course on co-op governance he took through CoopZone.

Josh likes working for CWCF because it’s good to its employees and responsive to employee needs. He also appreciates the values CWCF holds and how it tries to promote these through services such as the RRSP Program.

A graduate of Saint Mary’s University in Halifax, Josh holds a Bachelor of Arts in criminology with minors in philosophy and psychology. In his spare time, he volunteers as a Beaver Scouter, which he enjoys for the opportunity it allows him and others to have fun. Based in Kentville,  Laura MacDonald has served as CWCF’s RRSP Program Assistant since 2019.  When she’s not working at CWCF, Laura owns and operates Deep Hollow Print, a letterpress printing and graphic design studio in the Annapolis Valley in Nova Scotia. Laura has been running Deep Hollow Print for over 5 years now, and has won two East Coast Music Awards for her design work in the music industry.

Laura has a Bachelor of Arts Degree in English from the University of Wisconsin, as well as a Certificate in Book Publishing/Editing from Humber College in Toronto.

Laura has a couple of cooperative connections: she lived in an international housing cooperative in Madison, Wisconsin for three years, and her grandfather PD MacDonald was involved in the Antigonish co-operative movement in the 1940s. He started one of the first Credit Unions in Nova Scotia, which he managed until the late 1970s. She’s a big fan of the cooperative lifestyle and is proud to be working at CWCF! Based in Toronto, Reba Plummer has served on CWCFs board since 2010, and as board President since 2016. The Co-executive Director of Toronto’s Urbane Cyclist, Reba started out as the proprietor of her own bike shop before joining Urbane in 2000. She attended her first CWCF conference in 2006, and has been present at every one since. She is currently on the board of The Co-operators, having been nominated by CWCF, and previously served as the Greater Toronto Area Co-op Network Regional Manager for the Ontario Co-operative Association.

Having been a sole proprietor, Reba appreciates the shared responsibility that comes with belonging to a worker co-op. She finds that the co-op’s members have particularly demonstrated their commitment during the Covid-19 pandemic and stepped up to meet the challenges arising from it. She believes that Urbane’s members are committed to living out the co-op values in their work, seeking to create fair and equitable employment for all.

Reba believes a lack of understanding within the wider community remains a challenge for worker co-ops, and hopes to make them better understood. She would also like to grow CWCFs membership, and to ensure it has more resources available to support the creation of or conversion to worker co-ops. Evan Proven has served on CWCF’s board since 2019. A co-founder and longtime board member of Sun Certified, Evan has worked in the construction field for his entire career starting in concrete and moving on to wood framing, cabinet making, and super insulated renovation and new home construction.

Evan achieved his Red Seal Endorsement in Carpentry in June of 2017, and is currently a Masters Candidate for the Management in Co-operatives and Credit Unions program at Saint Mary’s University in Halifax. A married father of two and stepfather of two, Evan’s hobbies include beekeeping, gardening, cooking, snowboarding, sailing, and fixing things.

A strong believer in Co-op Principle 6 (co-operation between co-ops), Evan believes Sun Certified has benefited from the networking opportunities membership in CWCF has offered, and wants to continue fostering these as a board member.  Although he’s a firm believer in worker co-ops, Evan is aware of the challenges the movement faces, something he’s experienced both as a member of Sun Certified and witnessed elsewhere. But he’s hopeful that promoting the benefits of worker co-ops will succeed in growing the organization’s membership and increasing the movement’s diversity.

“I just personally believe co-operatives are a way better model of running a business and potentially running an economy,” he says. “I think that co-operatives have a really, really important role in balancing the economy and making sure that people have opportunities for meaningful employment that also pay a decent wage.” Jessica Provencher has served on CWCF’s board since 2011. She got her introduction to worker co-ops as a bartender at La Barberie, a microbrewery in Quebec City. During her time there, she spent six years as head of co-operative life, representing the co-op at conferences and on various boards. She is currently on the board of The Co-operators, having been nominated by CWCF.

Serving on the board has allowed Jessica to learn more about worker co-ops in the rest of Canada, and to bring her experience from the Quebec sector to CWCF. She believes she’s benefited from building relationships with members of the worker co-op sector who share common values in spite of geographical separation, and learning that there were more people committed to worker co-ops in Canada than she believed.

“That gave me faith and confidence that there were a lot of people in Canada and throughout the world that wanted this model to be more dynamic and more well-known,” she says. “So I think how I’ve benefited the most is it kept me motivated to work in worker co-ops and to help and support them to be viable.”

Jessica believes in the worker co-op model because it empowers workers in both their work lives and other areas, and thus helps create stronger communities. She also believes CWCF has both a challenge and an opportunity in the coming years to grow Canada’s worker co-op sector, and that issues such as the impact of the Covid-19 pandemic, the climate crisis, and precarious employment make this especially timely.

“I think the worker co-op movement can be a very good example of how it works when people come together and share the power and responsibilities in organizations,” she says.