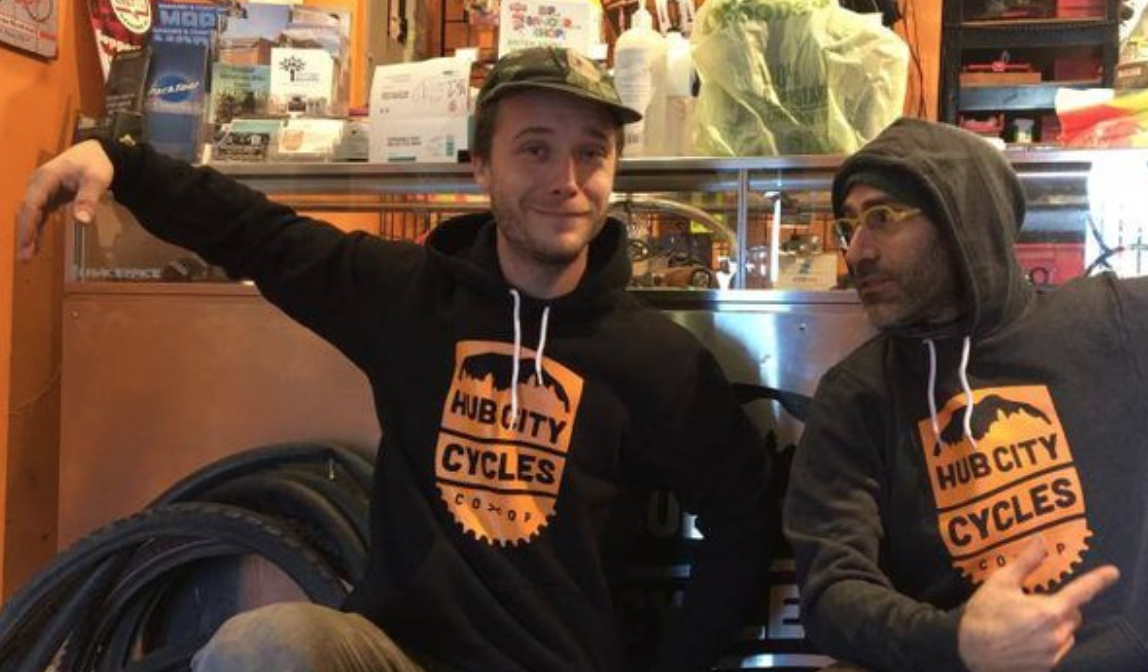 From its modest origins as a bike repair shop in founder Jawn Lafratta’s basement to the multifaceted operations it now carries out in Nanaimo’s downtown core, Hub City Cycles has come a long way. Established as a multi-stakeholder co-op in 2012, Hub City grew out of the desire of Lafratta and his two cofounders to provide low-cost bike services to the area’s low-income residents and encourage the growth of Nanaimo’s then-marginal cycling scene. Lafratta was also inspired by bike user co-ops he’d seen elsewhere that allowed users to bring in their bikes for repair and work alongside the worker members, benefiting from their tools and expertise, and also earn credits by volunteering.

“When I first started researching, I wanted to make the business a co-op,” says Lafratta. “And as I learned more about co-op structures, I guess the goal originally was to have community engagement, so I wanted to have a co-op that would be a user co-op, and then as I learned it could be multifaceted and have a user co-op and a worker co-op together, then I thought, sure why not, that’s even better.”

The co-op now boasts over 200 user members, who share in the co-op’s decision making and have the opportunity to serve on the board of directors. Lafratta acknowledges that the do-it-yourself component of his vision for the co-op hasn’t yet  turned out as he’d hoped, with users repairing their own bikes comprising a small portion of the shop’s business. But the co-op has seen an increase in cycling’s popularity since its founding, with more cyclists and bike lanes on Nanaimo’s streets, and more mountain bikers flocking to nearby trails as well. Several members of Nanaimo’s city council are user-members, with a desire to continue making the city more bike friendly, and the pandemic has resulted in increased interest in cycling as well.

The co-op has also benefited from its work with local consultant Joy Emmanuel, who it retained in 2018 with the support of a CWCF technical assistance grant to help with issues such as budgeting and strategic planning, areas Lafratta wishes Hub City had had a consultant to advise on at the outset. Asked what advice he would give to co-ops now, Lafratta suggests hiring a co-op developer.

“I spent a lot of time learning things on my own that would probably have been a lot easier and faster if I’d had someone helping me along,” he says. Cause I wasted a lot of time just making mistakes.”

Thanks in part to Emmanuel’s help, however, the co-op has found ways to deal with issues such as maintaining a consistent cash flow and ensuring the work of the board of directors is more evenly distributed. Emmanuel believes addressing these challenges is made easier, however, by the worker-members’ dedication to the co-op.

“I’ve often thought of them as ‘the little co-op that could,’” she says. “They’ve operated on a shoestring for years, fired by a lot of passion and commitment for what they do and have slowly built a strong foundation for growing their business.”

One challenge Hub City still faces is the widespread lack of public understanding surrounding co-ops, which worker-member Nico Damiani says has made it difficult to engage the co-op’s volunteers.

“We have a lot of people who are really interested in volunteering and helping out and we have very few people who have enough education to direct our volunteers properly and give them the tools that they need to succeed,” he says.

Working at Hub City has been a learning experience for Damiani as well, who acknowledges he knew little about either bicycles or running a business before joining Hub City. But despite the knowledge he’s gained on those fronts, the main takeaway may be what he’s learned about people.

“There’s a lot more focus on just human interactions and developing yourself based on your interactions with others, sort of like some people you have to work with on the board of directors, or your worker-members, you might not see eye to eye all the time, but finding compromises and finding a balance where everybody can enjoy their quality of life in the workplace,” he says. “That to me is one of the most rewarding things.”