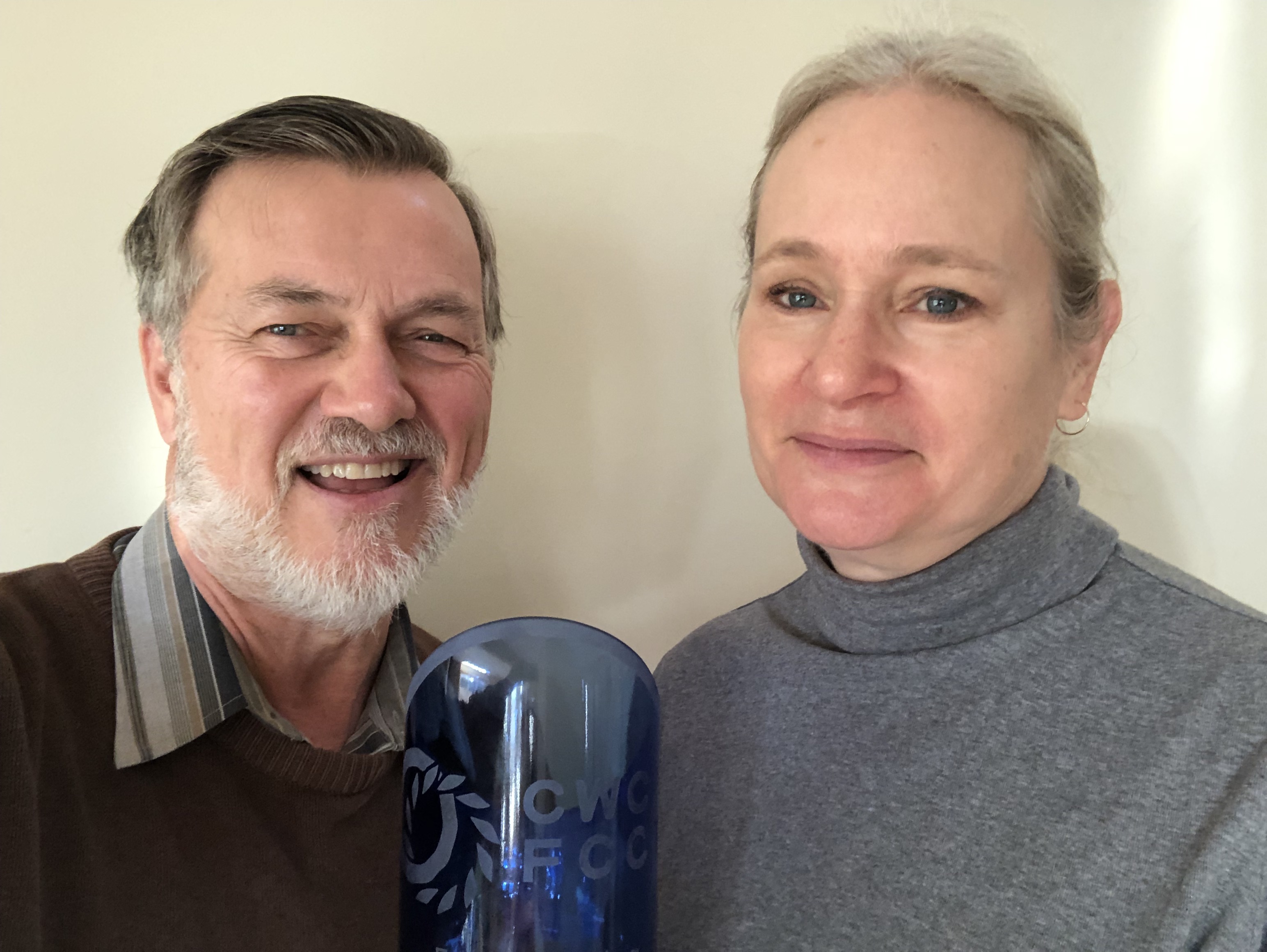 For those who did not have the pleasure of knowing the late Mark Goldblatt (for whom this Award is named), we shall explain who he was. Mark was an iconic figure in the Canadian co-operative movement generally and the worker co-op movement in particular.  He was CWCF’s board president for 14 years early on, at a time of very low resources, and worked as if he were a paid staff member.  You might want to read the moving tribute to him on the CWCF web site.   We miss Mark’s sage advice and bear hugs, and we sincerely thank his family for sharing him with us freely for so many years.  That sharing continues, through the Foundation, and also since Mark included in his will $25,000 for CWCF to create the Youth Art & Culture Grant, which we award every year to a young person.

Eric Tusz-King (pictured above receiving the award from Margaret Tusz-King) served as the Atlantic region director on CWCF’s board for four terms of three years each, from November 2008 through November 2020.

His introduction to the worker co-op movement began with the development of EnerGreen Builders’ Co-operative (where he was manager for 10 years), which was created to build energy-efficient homes in 2006. His interest in the co-op model, however, goes back to his university years, and has included membership in co-ops of many different kinds. He has initiated, encouraged and/or been a member of several different types of co-operatives.  Some of these initiatives are Beauséjour Renewable Energy Co-operative, an investment co-operative in community solar and wind renewable energy projects; as well as Open Sky Co-op, a solidarity (multi-stakeholder) co-op that provides residence, vocational and social support for people who face barriers due to mental health or social development challenges. He is currently with Aster Group, an environmental consulting co-operative. Eric was also the Course Director for the CoopZone Training Program from 2016 to June 2021.

In 2011 Eric enrolled in the CoopZone Training Program. After completing that course, he did an assessment of the Training Program and in 2016, was appointed as Course Director until June 2021.

Eric believes the co-op model, particularly worker co-ops, is the best model for achieving economic, social, and environmental goals, a belief that is closely tied to his faith in humanity. He believes that people are good, and that co-ops build on our inherently cooperative nature, as opposed to the competition encouraged by traditional capitalism.

Eric feels that CWCF has a significant role to play in helping its members by fostering a supportive ecosystem. His long tenure on the board has acquainted him with a committed group of people, and he appreciates the camaraderie that he’s found with fellow board members during this time.

Eric believes that the commitment CWCF has made to engaging with the social and solidarity economy will play a key role in its mandate over the next few years. With much of the economy needing to be rebuilt as a result of the Covid-19 pandemic, he considers the present an opportune time for worker co-ops to demonstrate their vision for a brighter future.

Eric contributed to many CWCF committees during his tenure on the board, including the Policy Committee, the Conference Planning Committee, for many years the Executive Committee (as VP), and the HR Committee (now called the Personnel Committee).  He has also long been a CWCF delegate or alternate delegate to the Atlantic Region of The Co-operators.

Thank you, Eric, for your years of service. Your contributions to Canada’s worker co-op movement are much appreciated.