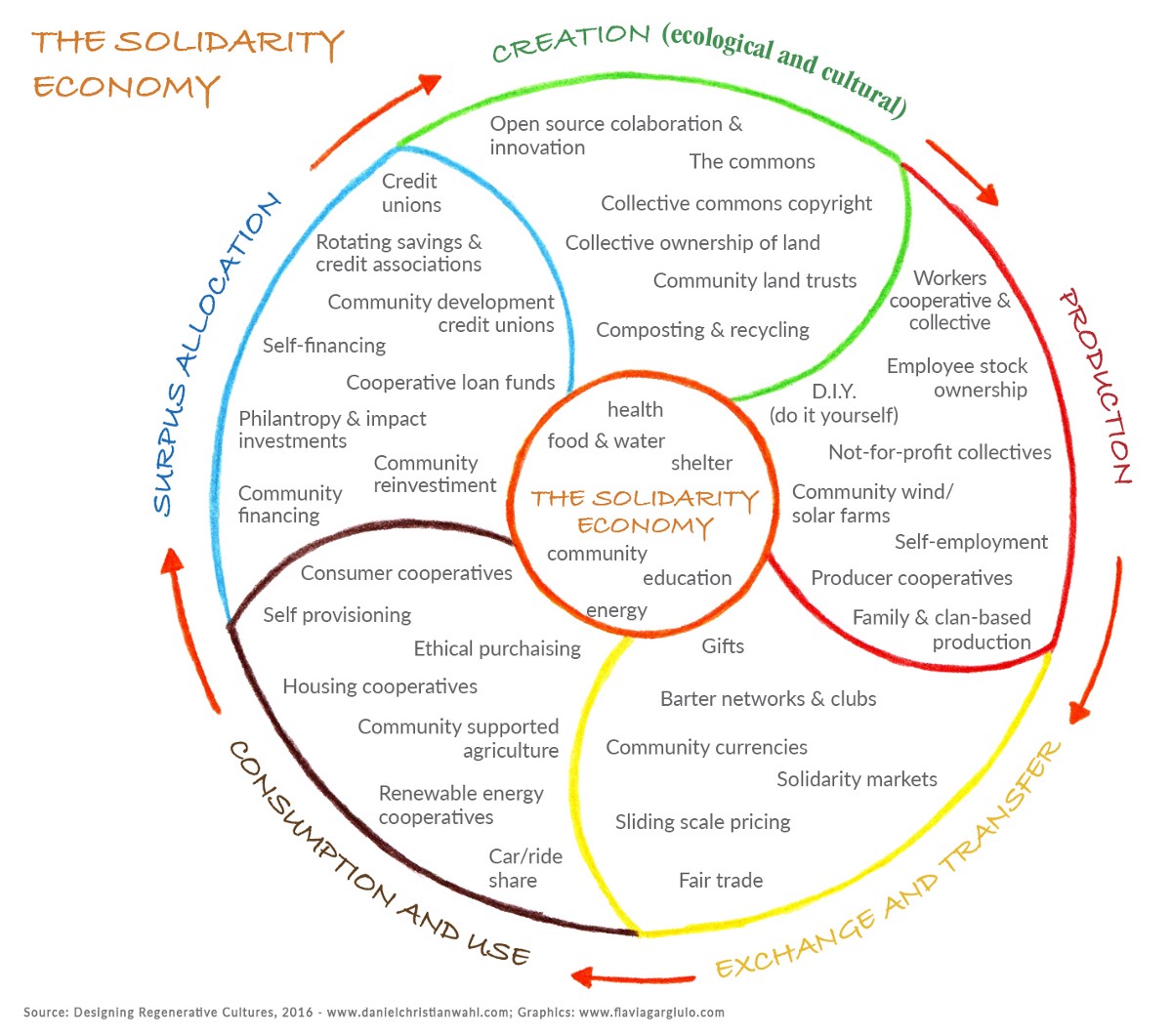 A set of Solidarity Principles are in process of being developed by a US group in response to the realization that such guidelines could lead to more cohesion among the various types of groups and entities involved in the solidarity economy.

The term “solidarity economy” does not have a precise definition. In the words of Ethan Miller, “The concept does not arise from a single political tradition or body of ideas. Its very nature and definition are in continual development, discussed and debated among its advocates.”

Inspired by a diverse array of sources, including the International Co-operative Principles, a group in North America has assembled a series of Solidarity Economy principles and practices. Conscious of the need for a wider conversation, the group created a  timeline and process to engage communities and organizations. Its members held workshops and gathered feedback in other ways throughout the fall and winter of 2021 into the spring of 2022, and are now in the process of responding to what they heard.

Rebecca Kemble, one of the group’s members, says the feedback they’ve received has been quite positive.

“Once people dig into the actual principles and look at the practices, they connect with them in a very deep way,” she says, “and they’re very appreciative. They might not completely understand or agree with them. But they are very appreciative of the opportunity to discuss them.”

Kemble is also quick to stress the distinction between the solidarity economy and the social economy, which in the words of Michelle Williams, “seeks to achieve limited, progressive change within the confines of the current social order.”

“Anyone who is paying attention to the world today,” says Kemble, “the steeply increasing inequality and conditions of oppression, the absolutely catastrophic climate emergency that we are now in, we understand that to make life a little bit less painful for some people while these underlying systems continue to create harm is not going to get us anywhere collectively as a whole. What we have to be aiming for is to transform these underlying systems, in a way that is sustainable and in a way that is based on values that are very different from these systems that are creating harm, and that’s what we see in solidarity.”

The solidarity economy, in contrast to the social economy, seeks to transform our social, economic, and political relationships and institutions. Juliet Kego Ume-Onyido of Black Women Professional Worker Co-op, believes that’s exactly what’s called for in these times.

“I start from the premise that the capitalist model has a lot of gaps and we saw that during Covid, that became more evident that it’s not serving a lot of people,” she says. “There’s the inequalities, the gaps between those that have, those that are struggling, being left behind is so wide. and so there’s a need to look at what exists, and then find a way to fix it, and I see the solidarity economy principles as something that is very transformational because it’s really not about incremental changes. It’s a totally different worldview, it’s a new prism of creating a system that puts people at the centre, and not just profit.”

The scale of such a transformation might seem daunting, and the group acknowledges the tension between realism and idealism in this work. But that people are even talking about this tension is one of the things that inspires Kemble to keep going,

“I actually have a very deep faith,” she says. “I’m gonna go deeper than hope, and say, I have faith, and those of us who have this spark wanting to build solidarity,  that we can, and we will do it. I know we will, no matter what the conditions are. Because you know, for so many of us. it’s become part of our identity as a human being. So it’s not something we’re just going to give up on, no matter what circumstances confront us, because so many of us have that very deep, deep faith in the process and in solidarity.”