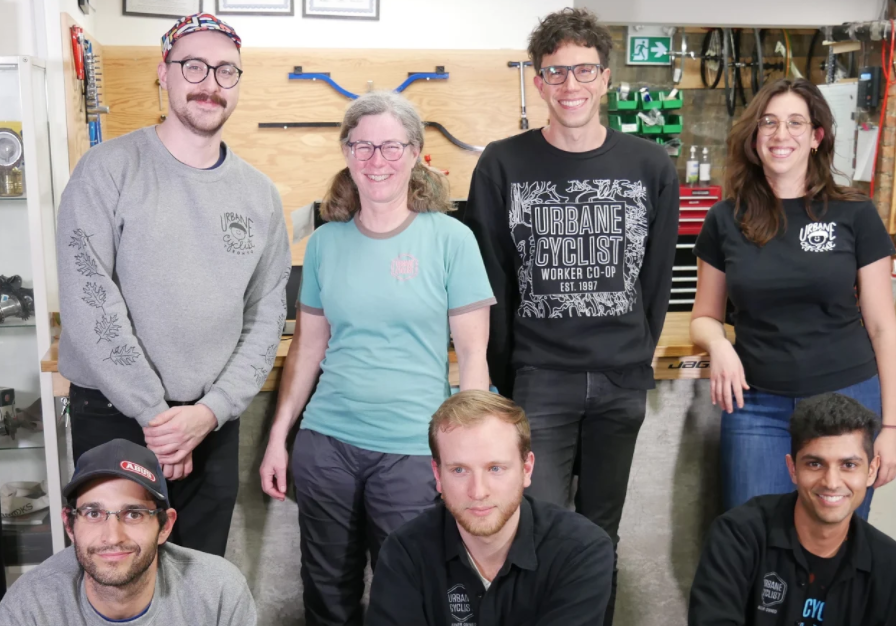 It’s sometimes said that “if you love what you do, you’ll never ‘work’ again.” It might seem like a cliche. But for the members of Toronto’s Urbane Cyclist, it’s not very far from the truth.

Urbane’s founding in 1997 was led by the late Eugene Yao, who wanted to establish a repair shop specifically for commuter cyclists, which made Urbane an anomaly in Toronto at the time. The shop eventually went on to sell parts and gear, then commuter bikes, and has since expanded to the recreational cycling market.

Owen Ardal, the Co-op’s president, didn’t join Urbane specifically because it was a worker co-op. But it’s the focus on customer service, among other co-op attributes, that have gotten him to stay. Although he works in sales, he doesn’t consider himself a salesperson because he’s simply sharing his passion for cycling with others.

“So it’s that, ‘hey I’m really passionate about this, let’s go talk about this cool stuff I really like’ instead of ‘let me sell you a bunch of things,’ he says. “I think that’s also what’s nice about it is it doesn’t feel like you’re working when you’re doing what you like, and getting a chance to work with a team, learning new skills.  I also really appreciate the commitment to education that the Co-op has.”

Reba Plummer has had a similarly positive experience. Initially the proprietor of her own Toronto bike shop, she decided after a decade to wind down its operations and join Urbane instead, which she’s been with since 2001. Twenty years later, it’s a decision she’s glad she made, as she can combine her love of cycling with a workplace where she’s no longer solely responsible for everything.

“I don’t have to make all of the decisions,” she says. “With other people to help with those decisions it’s a more supportive atmosphere, which I really like.”

The democratic nature of a worker co-op appeals to both Ardal and Plummer. But as they acknowledge, workplace democracy also inevitably makes things more complicated.

“I often joke that the strength of the Co-op is also its weakness,” says Ardal, “which is the fact that we do things democratically. And I see that as a full-on strength, but I think what’s challenging is putting in the extra time, making sure everyone’s on board, everyone gets their say and their voice heard. It is a slower process and it can be more labour-intensive too, you know, someone might have a very strong opinion and think we should just do something (a certain) way.”

Ardal nonetheless believes that democracy makes for better decision-making in the long run. And as Plummer points out, their co-op has discovered that many of the issues worker co-ops face are universal within their sector, regardless of what type of worker co-op they are. Belonging to CWCF and attending events such as its conference, Plummer and Ardal agree, has been illuminating in this respect.

“Things like the CWCF Conference are helpful,” says Plummer. “Because I know that a lot of times you will say ‘why would I go to that conference, you know,  I brew beer and you’re a bike store. So what do we have in common?’ And then when you get there you find out that you have a lot of things in common.”

Urbane is still mapping out its path for the coming years, but hopes to begin organizing group rides again in the post-pandemic era, as well as expanding its social media presence and continuing to offer more options for customers online. But while what it sells may continue to change, how it sells — focusing on offering the best products, rather than reaping the highest profits — is sure to remain the same.