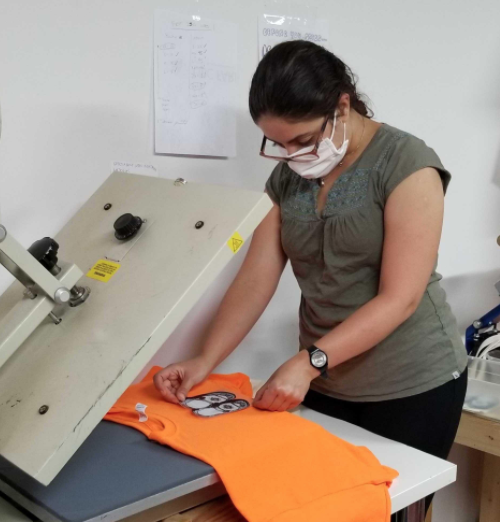 As responses that arose in the 19th century to the excesses of industrial capitalism, unions and worker co-ops have much in common, with both seeking to improve the lives of working people and increase democracy in the workplace. Accordingly, there have been many instances of co-operation between the two in recent years, including the Union Co-ops Council of the US FWC and the creation of these Canadian Guides to support union-led conversions to unionized worker co-ops from other business forms.  But unionized worker co-ops, which would seem to offer the best of both worlds, remain a relative rarity.

One exception to this rule is Vancouver’s VALU Co-op, which is both a worker co-op and a fully unionized workplace. Established in 2020, VALU’s members produce campaign materials including buttons, stickers, graphic totes and t-shirts, and a range of print services, and are founding members of the union which represents them, The Arts and Cultural Workers Union (ACWU), IATSE Local B-778, established that same year.

VALU’s Jonny Sopotiuk says the Co-op’s members had multiple reasons for wanting to unionize: it appealed to them on an ideological level; it provides a way to address power dynamics within the Co-op;  and on a more practical level, it allows them opportunities to work with unions who typically reserve contracts for other unionized organizations.

Although unionization has been important for all three of these reasons, Sopotiuk points to the ability to resolve disputes as a key example of how VALU has handled things differently than a non-unionized worker co-op would have. In situations where allegations of harassment have arisen, VALU’s comprehensive dispute resolution policy allows the Co-op to get access to labour relations experts and ensures both parties to the dispute have a union steward to represent them.

“It ensures that our members who may be feeling isolated have someone in their corner,” says Sopotiuk, “and is also there as a counterbalance to the co-operative as a business, as an organization, to ensure that we are following our processes. Because people are people, we all have conflicts, we’re going to have personality clashes. Working together can be tough at times, and the union’s there to make sure we are following the processes we’ve collectively agreed to.”

But while unionizing a worker co-op at the outset can be a complicated process, unionizing an existing worker co-op can be even more daunting, as Charlie Huntley and their coworkers at the Just Us! cafe in Halifax (now Glitter Bean) discovered during their campaign in 2013. Dissatisfied with the working conditions at the cafe, Huntley was encouraged by a friend of theirs to consider forming a union. But Just Us! management at the time, according to Huntley, initially had a negative response to the idea, causing its employees to launch a series of protests for the right to unionize. Their efforts ultimately succeeded, with the Just Us! Halifax cafe joining Service Employees International Union Local 2 in December of 2013.

Since the Just Us! Halifax / Glitter Bean’s unionization, few worker co-ops have followed in its footsteps. Huntley attributes this to negative perceptions of unions in society and the inability or unwillingness of worker co-op members (and non-member employees) to consider the bigger picture.

Sopotiuk, for his part, doesn’t believe that unions are a panacea, but even in worker co-ops, he maintains, they are necessary. While neither worker co-ops nor unions are perfect, he believes, the two of them together offer a concrete alternative to traditional capitalism.

“I think this model is a model that could be pursued in every sector,” he says, “and bringing the labour movement and unions into a proactive space in helping to develop and launch co-operatives, it brings so much potential.”

However, the two movements have shared historical roots and shared goals of improving the conditions of working people while increasing democracy in the workplace. Given these common goals and the shared commitment to worker solidarity, we strongly support having worker co-ops and trade unions work together as allies. Among other things, CWCF encourages everyone who supports workers’ rights to patronize worker co-ops as well as unionized workplaces.

As the US FWC’s Union Co-ops Council said in a recent Statement, “Labor unions and worker cooperatives … work together in solidarity to achieve similar goals. Each path provides the means for workers to have power and influence in their daily work lives. While cooperative ownership may bring additional earnings through the sharing of surplus and foster human dignity through worker control, the union movement has a rich history of raising the floor for entire sectors of workers, and assuring industry regulations, workplace safety, and agreements for wages and hours. Together, worker cooperatives and labor unions improve conditions for workers across the board. These all build a broader environment for good work. … [F]inding modern methods for these parts of the labor movement to work together will create stronger communities and greater support for the larger cooperative movement as well as greater success for worker cooperatives and labor unions.”

Whether within the same enterprise as a union co-op or otherwise as allies, worker co-ops and unions both gain when they work together in solidarity.